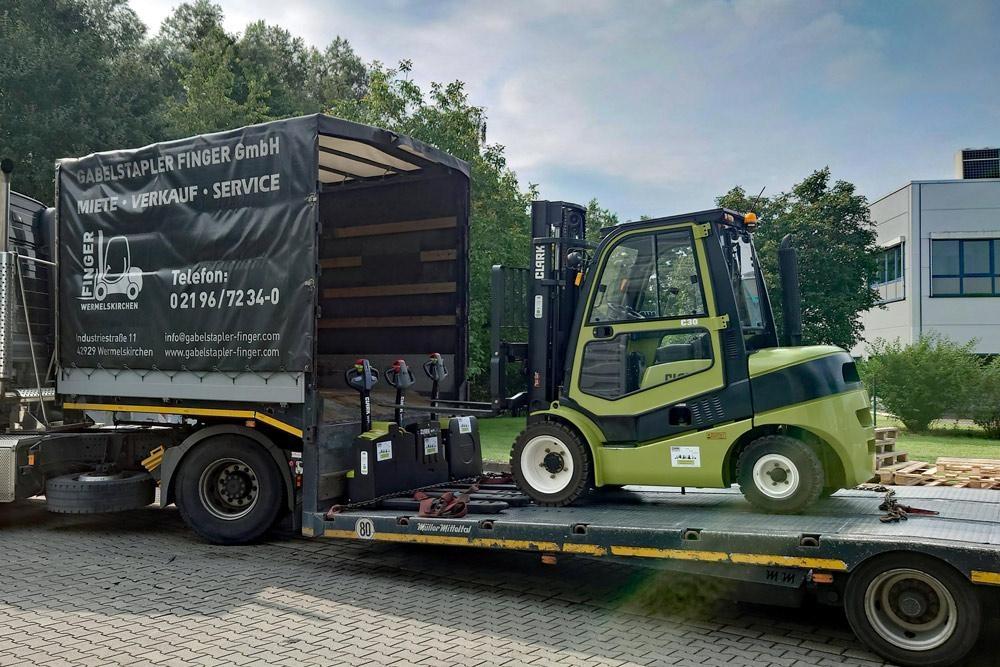 Duisburg, 12 August 2021 – Since the heavy rainfall in Germany over the past few days turned small streams into raging rivers, large parts of Nordrhein-Westfalen and Rheinland-Pfalz have been declared disaster areas. Since then, a wave of aid has been running throughout Germany.

Clark Europe is also helping the people in need and is supporting the German Technische Hilfswerk (THW) in the disaster operation at the Nürburgring. Three Clark WPio 15 electric low-lift trucks and a Clark C30D diesel forklift are on site loading the THW's emergency vehicles, which are travelling from there to the disaster areas, with materials and helping to supply the relief workers on site.

"For us at Clark Europe, it was clear from the outset that we wanted to help the people in need as a result of the floods" explains Karl Hielscher, Director Logistics at Clark Europe. "I immediately contacted the THW. The head of operations in charge told us that materials handling vehicles were urgently needed – to load the emergency vehicles, to supply the relief workers and to distribute the donations in kind, which are now stored in three halls. The transport of the Clark trucks to the Nürburgring was organised free of charge by our dealer in Wermelskirchen, the company Gabelstapler Finger, whom we would like to thank again at this point."

Because of the infrastructure and location, the Grand Prix circuit at the Nürburgring has become the operations centre for the aid organisations. Here are the temporary accommodations for the emergency forces. Here they are fed and vehicles and equipment are maintained. Just under 40 km from Ahrweiler, the site is the ideal base camp for the state of Rheinland-Pfalz to coordinate disaster relief operations from. More than 5000 helpers from the THW, the fire brigade, the rescue service and the German Bundeswehr are stationed at the site. At the same time, the event centre of the Nürburgring has become a collection point for relief supplies. The public's willingness to donate was so great that the goods now fill three halls. "With the low-lift trucks provided, loading our emergency vehicles is not only faster, but our helpers' work is also made much easier," says a technical manager of the THW at the Nürburgring.