Duisburg Zoo has a new attraction: since June 2022, two manatees have enriched the biodiversity of the zoo on Duisburg's Kaiserberg. But transporting the two manatees Manfred and Pablo was a logistical challenge in which a Clark forklift played a decisive role.

Manatees Manfred (5) and Pablo (3) travelled from Odense Zoo in Denmark to Duisburg. And one thing for animal lovers in advance: Both survived the journey from Denmark, 669 km away, healthy and in good spirits. The extensive water area of the Rio Negro tropical hall is now their new home. The zoo team had prepared for the new arrivals many months in advance. This included procuring a rental forklift for loading the two heavyweight new zoo residents.

The manatees started their journey to the Ruhr area in two heatable trucks. A company specialised in transporting large animals brought not only the vehicles but also the manatees' travel accommodation. These were two special boxes with an empty weight of over 900 kg, which were filled with water during the transport. The loading of the animals in Odense and the transport to the Ruhr area was accompanied by zoo veterinarian Dr. Kerstin Ternes, who checked on the animals at regular intervals and measured the water temperature, among other things.

Weeks before the transport date, the responsible zoo staff made a forklift hire enquiry to Clark Europe. What was needed was a forklift truck with which the zoo could carefully load the transport boxes, including the new arrivals, out of the truck and transfer them intact to their new home. The zoo's own fleet did not have any suitable equipment that was up to this demanding task. "We needed a forklift that could lift at least four tonnes of load, because we didn't know in advance exactly how heavy the transport box, including water and manatee, would be," explains Christian Schreiner, press spokesman for Duisburg Zoo. Christopher Grefer, an employee of the technical department at Duisburg Zoo adds: "Since we had to unload the 3.6 m long steel-framed wooden boxes lengthwise from the back of the truck, extra long forks were also needed."

But there was another challenge: the load involved living creatures that might change position during transport. With a moving load, there is a risk that the centre of gravity of the truck will move. In the worst case, it could even tip over. So on the one hand, the rented forklift had to have as high a residual load capacity and stability as possible so that the boxes, which were additionally secured with tension belts, could be transported carefully. On the other hand, very sensitive load handling was required in order to carry out the transport as gently as possible.

"Clark immediately responded to our enquiry and offered us a suitable vehicle," says Christopher Grefer. This was a Clark GEX50 electric forklift with 80 V and a load capacity of 5 tonnes. The GEX50 can be operated very precisely via mini levers integrated in the armrest. Even with the steering fully engaged, the vehicle moves off sensitively thanks to the parallel front drive. When the driver activates the direction switch, the vehicle brakes gently and then accelerates again progressively in the selected direction of travel. An integrated tilt lock valve on the mast prevents the mast from tilting forward too quickly or unintentionally during load handling. The service brakes are encapsulated and thus protected from dust, moisture and aggressive media – i.e. also from rain in outdoor use. The Clark GEX50 was therefore predestined for this particularly demanding application. "With Clark, we can always rely on getting exactly the vehicles that meet the often very special requirements at our zoo through short official channels," adds Christopher Grefer. The zoo has already been working with the Duisburg-based industrial truck manufacturer for several years and, in addition to various transport and service vehicles, also has a Clark WSX12 electric high lift truck in its fleet.

When the trucks rolled onto the zoo grounds at around 10 p.m. on the day of the operation, more than 20 zoo employees and the Clark electric forklift were ready to receive the new arrivals and accompany the animals on their way to the Rio Negro tropical hall. In addition to the aforementioned imponderables of this mission, darkness set in. But with the help of the Clark electric forklift, the special boxes were lifted safely one after the other onto the specially made heavy-duty roller board. This stood on a gallery built especially for the arrival of the manatees. To do this, the boxes first had to be unloaded from the truck, set down on the ground and then picked up again crosswise on the forks. This was the only way to lower the cargo onto the rolling board. Despite the darkness, everything went smoothly. This was not least due to the fact that the truck was equipped with Clark Blue Lights at the front and rear in addition to working lights, rear combination lights with brake lights and reversing lights. This significantly increased safety. "The work area was perfectly illuminated. That was extremely important," says Christopher Grefer. "Thanks to the Blue Light, not only did I have a better view to the rear when reversing, but my surrounding colleagues always knew in which direction the truck was moving. The front Blue Light was very helpful when threading into the transport box.”

It goes without saying that handling performance was not the main focus during this operation. On the contrary, each individual work step took place as if in slow motion. "We made sure that every movement was slow and fluid. Vibrations were to be avoided at all costs," says Christopher Grefer. "The Clark forklift could be operated very sensitively using the mini-levers, so that I could pick up the box very carefully and set it down on the roller board on the gallery. The integrated sideshifter was also helpful. With it, the forks could also be moved sideways and I didn't have to constantly reverse."

Perfectly planned and executed in teamwork

When box after box finally stood securely on the rolling board one after the other, it took ten keepers each to push one of the water-filled crates together with the manatee to the edge of the water area of the tropical hall. The keepers then placed a so-called "stretcher" underneath the manatee - a kind of hammock. Then, with the support of a slewing crane, the animal was lifted out of the box and safely into its new home.

Sandra Dollhäupl, curator at Duisburg Zoo, was in charge of the transport and planned the manatees' arrival for weeks. The biologist was in constant contact with the European Endangered Species Programme (EEP) in Nuremberg and even visited the animals on site in Odense. For the arrival in Duisburg, the zoo had put together teams to ensure that every single step went smoothly. "For example, there was the 'forklift truck' team, whose only task was to make sure that the transport of the box by forklift truck was as gentle as possible," says Christian Schreiner. "For example, a colleague from the 'Forklift' team's only task was to instruct Christopher Grefer on unloading the transport boxes from the truck and unloading them on the roller bed." The "Box" team, which consisted of animal keepers, had the task of collectively pushing the boxes over the roller bed into the tropical hall. The "Crane" team, which was only responsible for the crane loading, was already waiting there. All teams had been trained several times beforehand for their respective tasks so that when the time came, the manatees would arrive safely at their new home.

This logistical challenge was a first for Duisburg Zoo. That's why everyone involved was relieved when the manatees were able to set eyes on their new sanctuary safe and sound. "In order for the logistical process 'manatee loading' to be successful, all the cogs had to mesh seamlessly," emphasises Christian Schreiner. "In this process, the Clark forklift had a very important function. We are glad and grateful that we could once again rely on Clark." 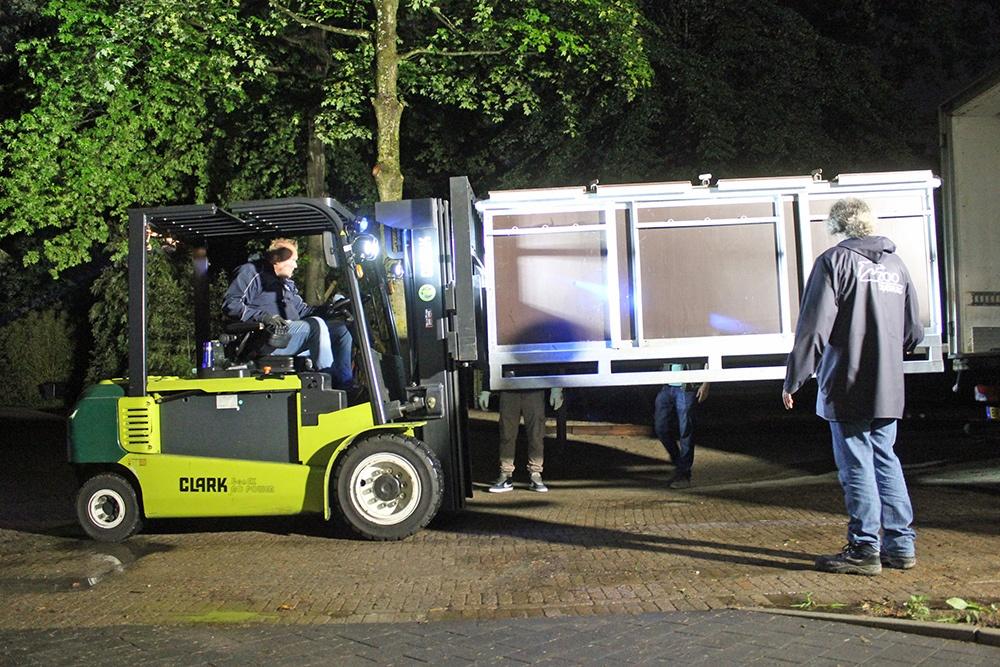 Duisburg Zoo was founded by Duisburg citizens on 12 May 1934. The zoo is known for its dolphinarium and the first permanent and for a long time only keeping of koalas in Germany. In addition, numerous zoological rarities are kept, such as giant otters from South America, bear stump monkeys and Roloway monkeys from Africa, fossas from Madagascar or wombats and marsupials from Australia. Duisburg Zoo cares for the animals entrusted to it with great passion and dedication, is an important place of learning and offers the region space to relax. As a non-profit medium-sized enterprise, it has an important economic significance and supra-regional appeal - far beyond the city area with over 80 years of tradition. Duisburg Zoo employs over 100 people who are passionate about the welfare of around 6000 animals. Since 2019, Duisburg Zoo has been a non-profit company and part of the Duisburger Verkehrs- und Versorgungsgesellschaft.

The manatees (Sirenia) are an order of herbivorous mammals with four species still living today. Among the animals still living today, elephants are their closest relatives. Besides whales and seals, manatees are the third larger taxon of sea-dwelling mammals (marine mammals). Unlike seals, they do not have suitable limbs to move on land. Unlike whales, manatees always stay near the coast or even in fresh water and often in very shallow water. Manatees reach a body length of 2.5 to four metres and a weight of 200 to 900 kg. Their habitat is the trophic waters of Africa, Asia, America and Australia. Manatees are leisurely swimmers that move very slowly under water. About every five minutes, the mammals come to the water surface to catch their breath. Since the animals mostly stay in shallow water areas, motorboats in particular are a great danger for the animals. Accidents due to collisions and injuries from boat propellers are not uncommon. The increasing pollution of their habitats as well as hunting are also increasingly affecting the charismatic heavyweights. According to the IUCN (=International Union for Conservation of Nature), manatees are considered an endangered species and are listed on the so-called "Red List". To protect their habitat, Duisburg Zoo has been supporting the Yaqu Pacha e.V. organisation for years, which works on the ground in South America for manatees and other aquatic species.