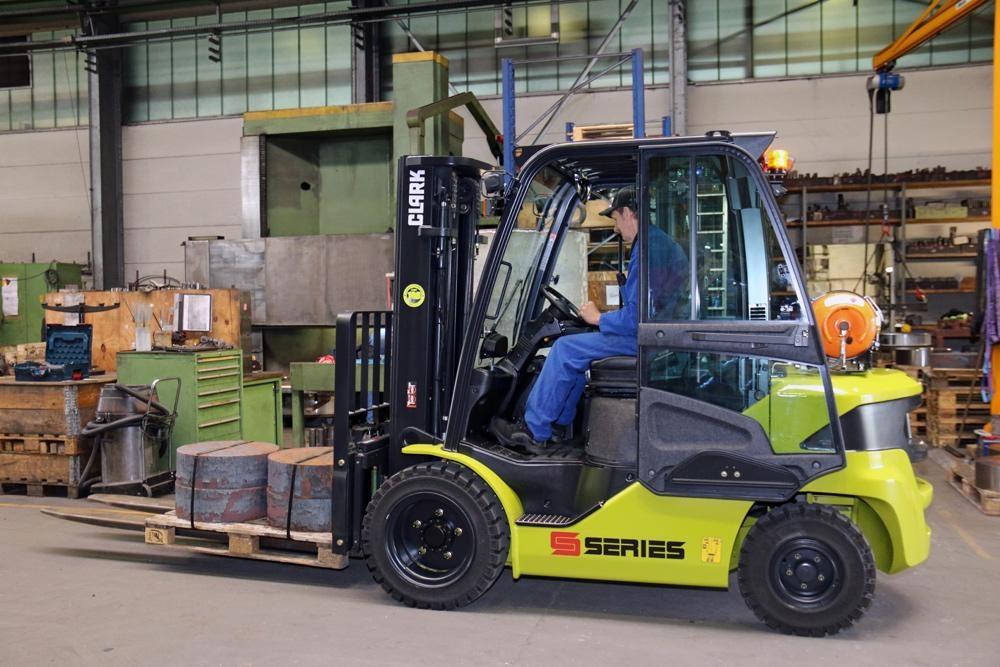 Gleitlagerertechnik Weißbacher GmbH (GTW) is one of the first companies to have put the new S-Series to a practical test. A S30L LPG truck with a three-ton capacity has proven its ability for five months at the Alpen plain bearing specialist. The conclusion: both drivers and management are delighted with the ergonomic improvements and active safety systems. Not least, they enable fatigue-free, safe and productive operation. 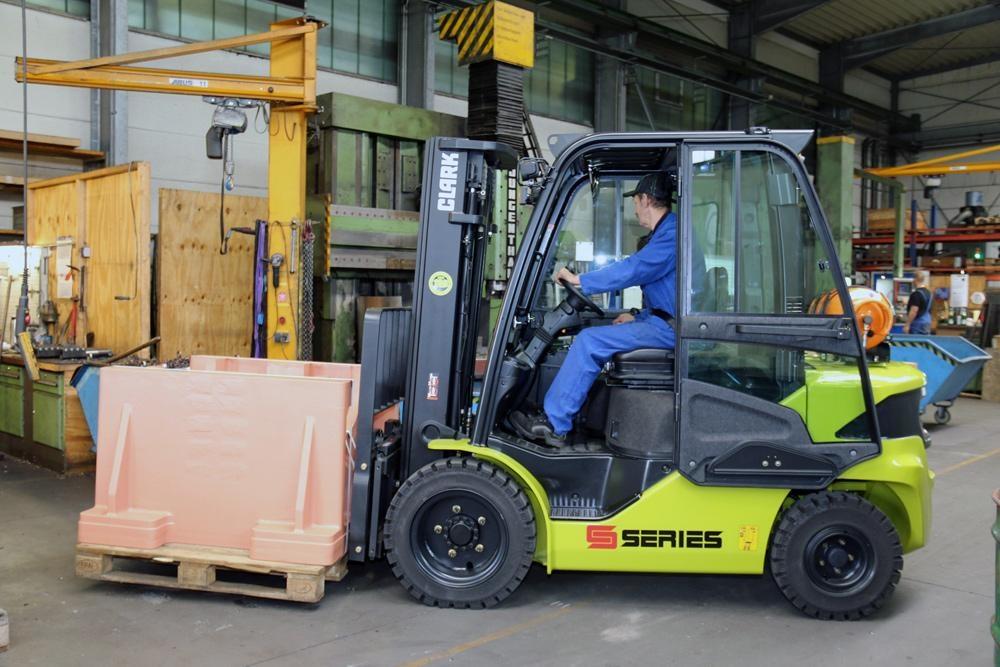 Wide product portfolio based on high level of development skills

"In the beginning we started with the production of semi-finished material based on customer drawings, then we added the machining of parts and since 1998 we have been developing our own plain bearings according to customer requirements", explains Christoph Weißbacher, Managing Director at GTW. "In order to survive in the industry and to keep customers long-term, it is essential to have your own intellectual property." According to Weißbacher, the percentage of outsourced production is only 25 percent, the rest is in-house. And he adds: "We secure our competitive advantage not only through our in-house development expertise, but also through the flexibility of being able to develop highly individual and innovative solutions for our customers.”

In addition to the housing plain bearing and bearing insert divisions, there is also a third pillar, the service division. Here too, the bar is set high. GTW customers can rely on rapid and straightforward assistance in the event of repairs, because machine downtime is a knockout criterion. With this range of services, GTW, with around 80 employees and an annual turnover of 18 million Euros in 2017, is also able to compete with larger competitors.

Over the years, the company’s operation has expanded continually. In 2017 the plain bearing manufacturer bought another hall and now has an operating area of approx. 8,000 m2. Of this, the hall area accounts for approximately 3,500 m2 while production accounts for some 2,500 m2.  The site also has a design office and the engineering department as well as administration. "Over the years, we have repeatedly expanded our operations to be prepared for further growth," says Christoph Weißbacher.

Since GTW specialises in the production of small series, the company manufactures on an order basis: Production planning manages the orders for the different production sites, and the shift supervisor compiles the corresponding unmachined parts and drawings for production. "This approach gives us a high degree of flexibility that we wouldn’t get with other production systems," explains Christoph Weißbacher. GTW is also somewhat conservative with its supply of stock. "We only hold identical parts in the warehouse or parts for customers who have concluded framework agreements with us," says the company boss.

Nevertheless, the outlook is always forward-looking. For this reason, the bearing manufacturer was quick to show interest in testing the latest forklift generation from Clark. GTW has been a Clark customer for many years and currently uses three GTS Clark LPG forklift trucks with capacities from 2 to 3.3 tons and a cabin, several Clark WSX pallet stackers with a capacity of 1.4 tons and a Clark reach truck. The forklift trucks are primarily responsible for transporting the unmachined parts. These are usually hot-rolled rings for plain bearing production, which are either transported from the external warehouse to the production halls, to the intermediate storage area or to the warehouse. The forklifts often travel long distances. In the production halls, a crane normally takes over the load handling. In some areas, however, the counterbalance trucks must also bring the parts to the production site. GTW has purchased all its trucks from the Clark dealer Technik Center Alpen (TCA), which is also responsible for servicing the trucks. The Clark dealer is just a stone's throw away from GTW’s premises. "Physical proximity, of course, has enormous logistical advantages for us. We can rely on smooth cooperation, "says Christoph Weißbacher. "If necessary, TCA will provide us with another truck without any fuss, in the spirit of helping out a neighbour."

The Clark dealer then also proposed GTW as a test company for the new S-Series, as its operations match the truck’s application profile. An advantage of the S-Series for GTW, for example, is the speed restrictor, which allows the truck's performance to be tailored specifically to the application. In particular, the drivers praise the decoupling of engine, transmission and drive axle. As a result, the vibration and noise of the S-Series are kept to a minimum, reducing the human vibrations that affect the driver. A high level of safety is provided by the load-weight measurement, which permanently measures the weight of the load on the forks, thereby giving the driver immediate feedback on the load being picked up. The small turning radius of the compact LPG truck pays off at GTW both in the warehouse and in the sometimes tight production areas. The mast damping system, which reduces shock and vibration during the transition between the individual mast stages, ensures safe and load-saving storage and retrieval. The integrated tilt-lock valve prevents too fast or unintentional forward tilting of the mast. "We have had consistently good experiences with the new S-Series from Clark, which we tested in all application areas in our company," explains Christoph Weißbacher. "Our employees are enthusiastic about the significantly improved ergonomics and how easy it is to operate the trucks."

“The new Clark forklifts are much more comfortable overall than other forklift trucks we have used in the past," says Waldemar Wagner, forklift driver at GTW. "Even getting on and off the truck is much easier, because the distance between the step and the driver's seat is shorter." He also found the seat to be significantly more comfortable. The direction switch integrated in the hydraulic lever is also new and well thought out. "I no longer have to reach to change travel direction", says the experienced forklift driver. Another positive feature is the truck’s new heated cabin. Since the forklifts are mainly used outdoors, cabin and heating are a must at GTW. "The driver's cabin has everything we need," says Waldemar Wagner. "A two-part side door with sliding windows guarantees good ventilation in summer, and in winter the powerful heater provides a nice warm interior.”

And Stefan Krebber, another forklift driver at GTW, adds: "Even for tall people, the new workplace offers plenty of headroom and legroom”. The smoothness and manoeuvrability of the S-Series has been further enhanced compared to the Clark GTS series. “All the controls are ergonomic and easy to use, which makes for safe and precise load handling”. The excellent all-round visibility is particularly impressive, according to the forklift professional.

"With a lower front panel and an optimised mast design," says Krebber, "the driver has a good forward view of the forks and load. The rear view camera, which is very similar to the ones used in cars, provides perfect support for reversing. This relieves the neck and shoulder area."

Another advantage is also the lighting system of the truck, which gives optimum illumination of the work area. As a result the Clark S-Series offers everything that drivers and operators appreciate about a forklift: a high level of operating comfort and reliable, safe and powerful operation, is the test conclusion at GTW. 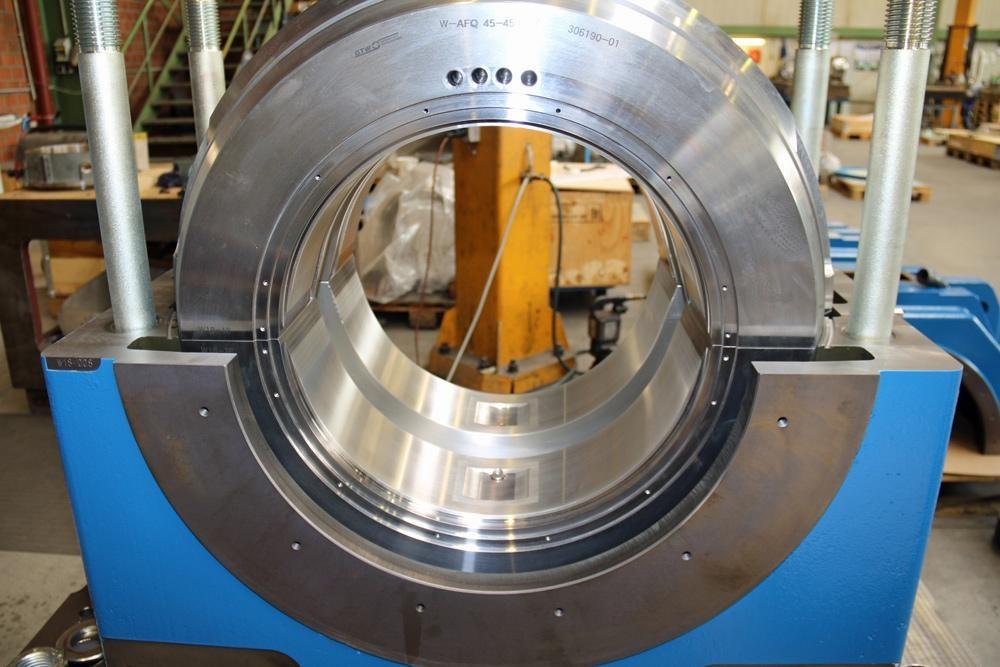 The success story of Gleitlagertechnik Weißbacher GmbH (GTW) from Alpen began in 1987. At that time, Georg Weißbacher became an independent outsourcing partner of MAN (formerly GHH - Gutehoffnungshütte), when MAN in Oberhausen gave up its own production of plain bearings for cost reasons. In those days the company still operated under E. Weissbacher Industrieservice. Due to the rapid growth of the company, GTW moved to its present location in Alpen in 1995. Company founder Georg Weißbacher is also a shareholder in a Czech company, GTW Bearings, which is one of the company's main suppliers. 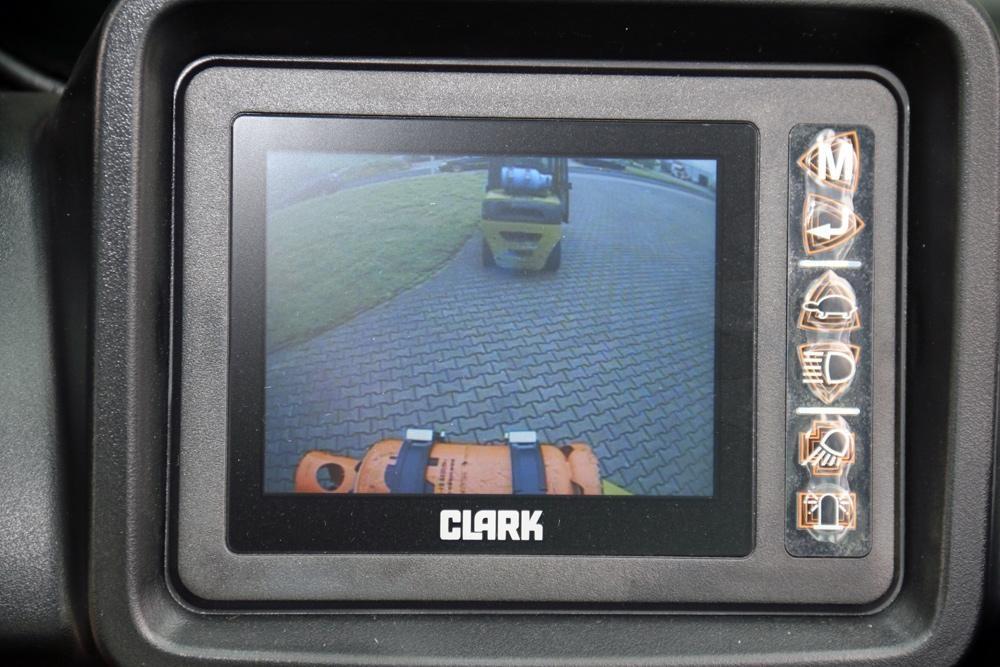 The rear view camera offers outstanding image quality. The driver has an optimal view of everything happening on the route when reversing. This not only protects the neck and shoulder area, but also helps to reduce the risk of accidents 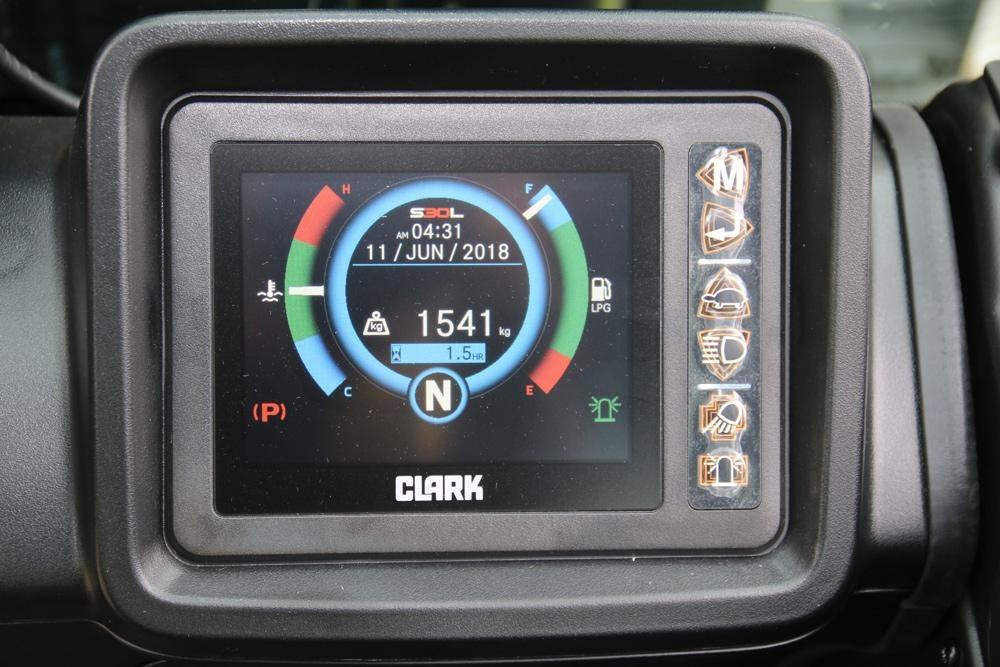 A high level of safety is provided by the load-weight measurement, which permanently measures the weight of the load on the forks, thereby giving the driver immediate feedback on the load being picked up 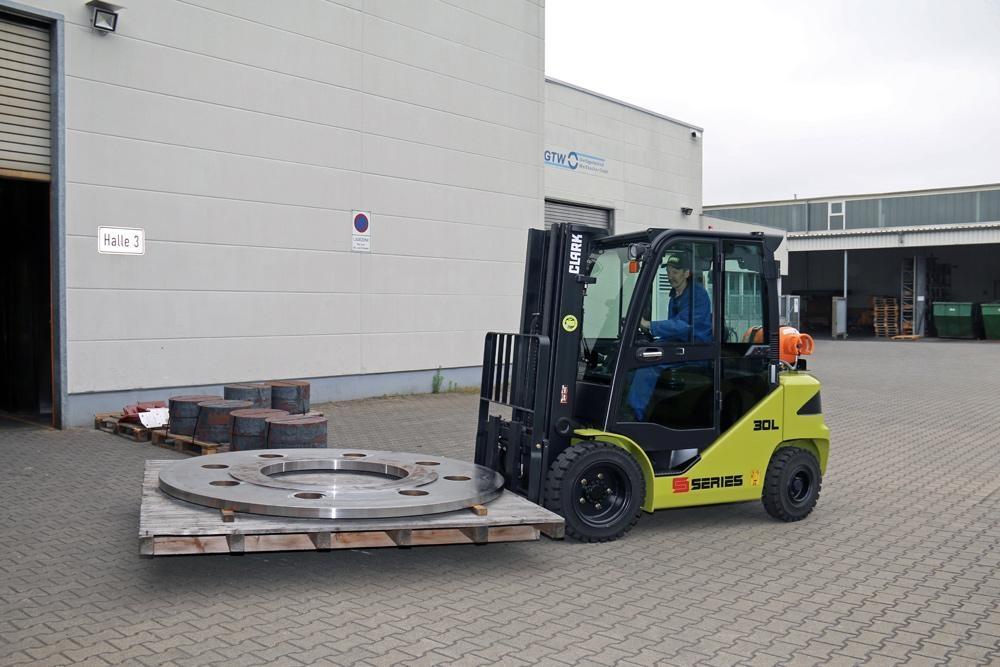 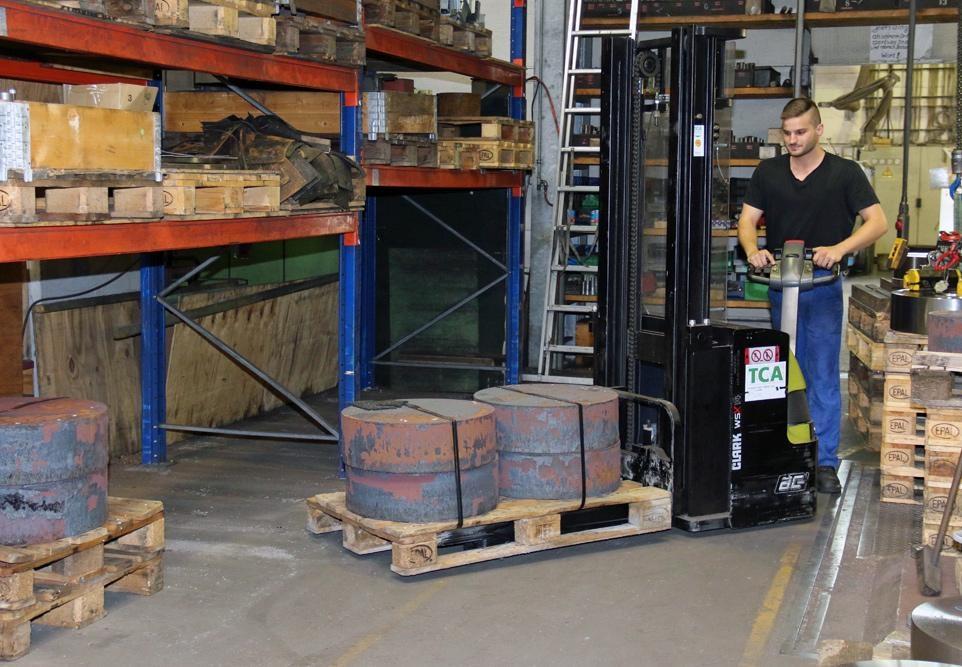 Clark WSX pedestrian stackers with a load capacity of 1.4 tons are used for load handling at the production sites and in the warehouse 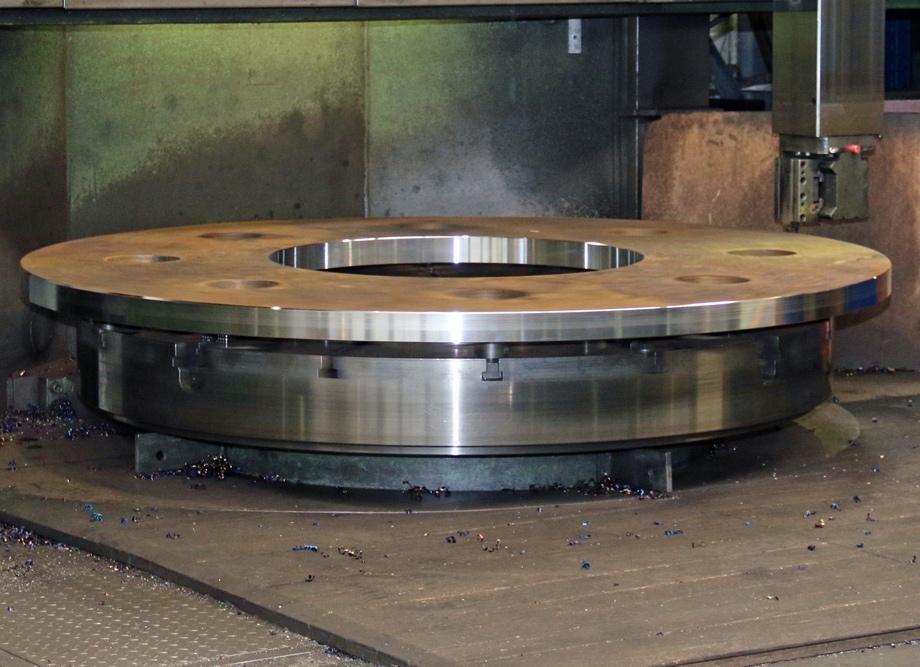 The plain bearing specialist has a very wide product portfolio. This includes not only plain bearings with diameters ranging from 30 to 6,000 mm, but also corresponding bearing inserts 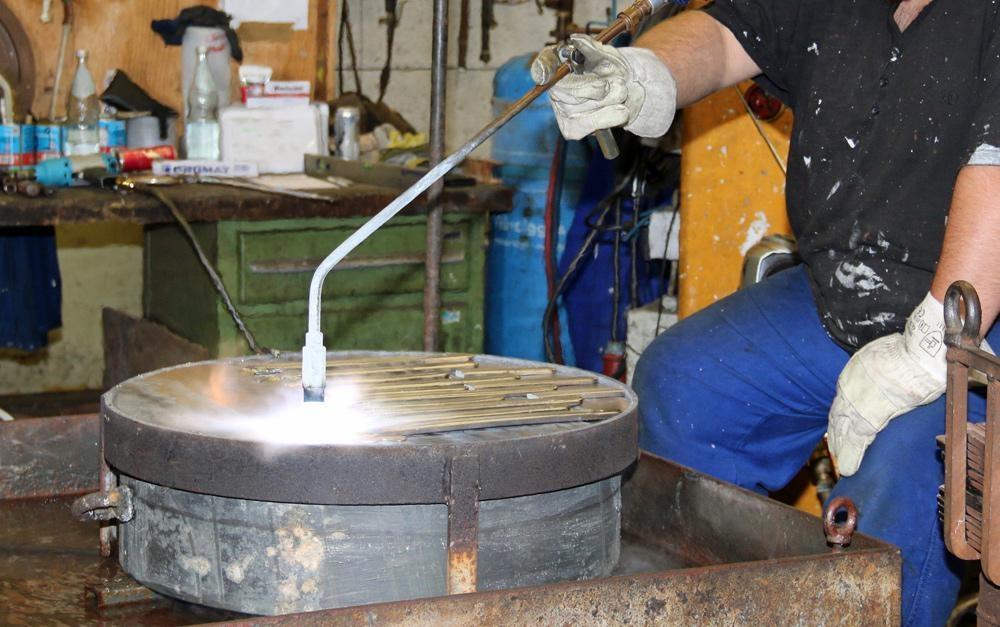 GTW does not operate assembly line production. The specialist manufacturer produces on an order basis. At this workstation, for example, bearing metal is applied to flat parts in a welding process 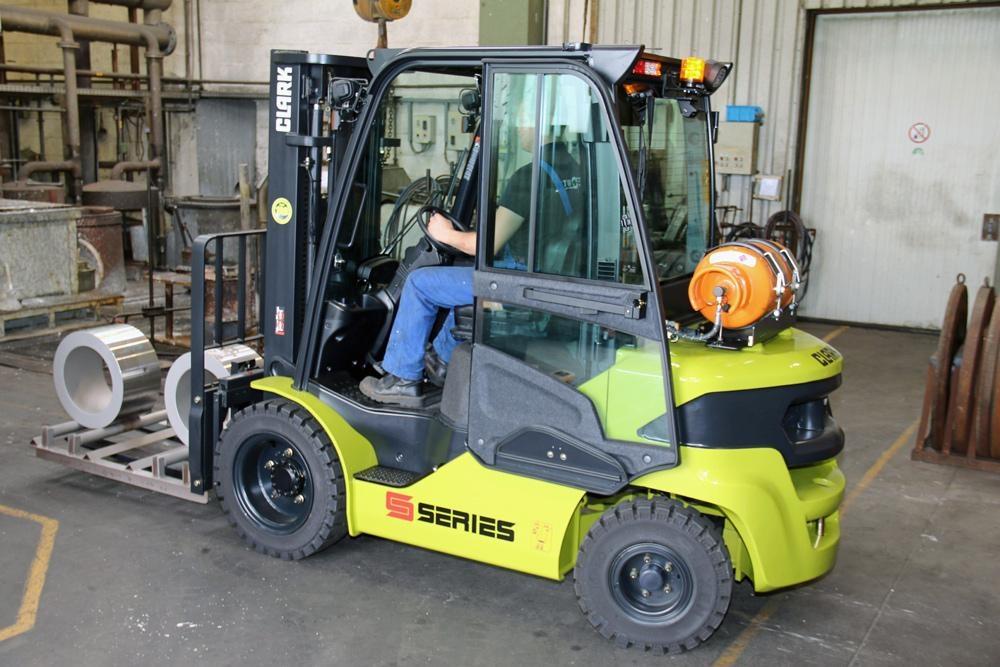 With the new S-Series all controls are easy to operate, allowing for safe and precise load handling 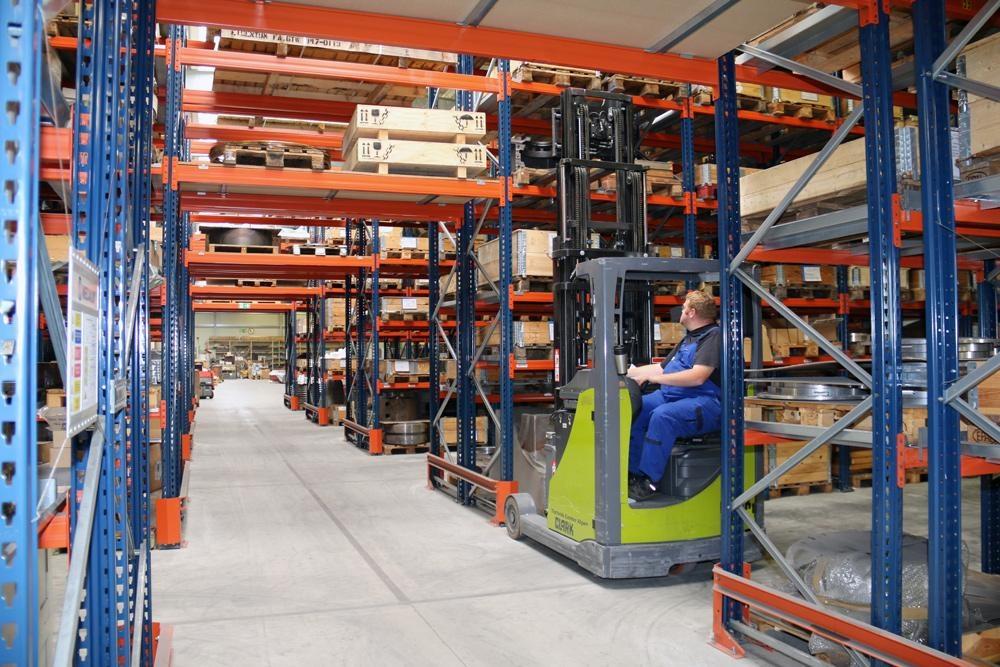 Forklifts with diesel or LPG drive